Where towering centuries-old forests meet the snow-capped peak of Mount Rainier is where I chose to spend a sunny week in May in search of yet another delicious destination. Yes, you read that right: A sunny week in May! And while the food was, indeed, delicious, it was the landscape there that I found the biggest treat of all. Unlike the distant views of both Cascade and Olympic range views from the Puget Sound region, the experience here is close-up. Real close-up. The reach-out-and-touch-it kind and it came in the form of wildlife and waterfalls and Lilliputian flowers and pecking sap-suckers and an Olympic-level majestic mountain peak. And everything in-between, of course.

Rainier’s just a two-hour drive from Seattle’s hustle-bustle. And, in case you were wondering, the area can certainly be touched upon in a day, or portion thereof, but be sure to enter into your single-day experience knowing you’ll likely leave wanting more – like that single lick of ice cream from your sweeheart’s cone, or one chip from a game-day bag. With that in mind, I set off for an entire week to completely immerse myself in a full-on experience on Rainier’s southwestern flanks.

No trip to Mount Rainier would be complete without a drive to Paradise (queue Joni Mitchell, please). It’s open year-round and boasts views that’ll literally make your jaw drop. I’d been there before – on one of those day-trips I mentioned earlier – and I’ve experienced the late-summer meadows with their rainbow of wildflowers bursting from the hillsides, and those months when the chill sets in and the leaves change to marvelous and amazing colors. But I was super-excited to see the super-snowy Springtime version. Paradise receives roughly 700” (yup – that’s almost 60 feet!) of snow annually, so as you can imagine it’s not melted off much until at least into the month of July. I took a few trips up during the week – the most memorable of which involved simply pulling up to the nearest snowbank, opening my tailgate, pulling out my favorite camping chairs and enjoying a picnic lunch  with a front-row view of the largest mountain in the contiguous United States! Far off in the distance, between the deep turquoise blue of glacier cracks and a sea of rocky slabs, tiny specks slowly revealed themselves to be mountain climbers returning from a morning summit. Skiers hiked from the parking lot as far as could be seen, then carved their way back down. There were plenty of cameras, and more people than you’d expect on a Monday in May, but I still managed to find a little spot to just sit and take it all in.

In case you’re wondering: Paradise has a Visitor Center, a lodge (with full dining room and overnight lodging seasonally), lots of bathrooms, and an abundance of hiking trails, too. While the Visitor Center wasn’t open due to COVID restrictions, Paradise Inn – with dining, lodging and day-use options, opened just after I left.

And then there was pie. One of the first stops just outside the gates of the park is the Copper Creek Inn. Its cedar shake-clad exterior holds the most famous pie in the county. The inn opened roughly 100 years ago – originally a service station with a back lunch counter. Her notoriety in the 20s and 30s came during prohibition as a “bottle club” where loggers and locals could bring their own liquor and purchase mixers. I’m told it’s the longest continuously-operating restaurant in the state and the inn’s kitchen’s been cranking out their famous blackberry pie since the ‘40s – nearly one every 45 minutes! I can attest to the notoriety and drive-worthiness of this famed pie (adorned with a healthy scoop of vanilla ice cream, of course). It’s as close to perfection as you’ll find – with a beautifully-brown homemade crust that’s bursting with sweet local blackberries. It was so good, in fact, that I went back for seconds a few days later. 😉

The Mount Rainier are has no shortage of waterfalls – from the most obvious, Narada Falls and Christine Falls, to those that require a bit of a hike. But the waterfalls that I loved most were the personal-sized ones: They’re anywhere from four to fourteen feet tall and I could sit at their bases and let the water splash up on my feet, or my face (depending on how close I wanted to get). These little waterfalls are prevalent now with the Spring snow runoff, so what’s here today could easily be gone tomorrow.

The road to Paradise has dozens of pull-outs and waysides. Many don’t reveal anything remarkable until you’re out of your car and down a trail. Most offer historic and/or geologically-significant signage about the location. One favorite was just before Cougar Rock campground and – at quick-glance – revealed a commanding view of the Nisqually River. Upon closer inspection (and a short walk down a rocky trail) spectacular views of the Nisqually Glacier were camera-ready, as was opportunity for an exhilarating walk across a log bridge, and a trail that ended at Carter Falls. Take in a little or a lot, whatever your preference – there’s something around every corner!

My lodging was on the southern corner of the National Park – just a couple of miles from the Nisqually entrance. The main highway – a two-lane road just down the little dirt road leading to my cabin, was fairly busy during the day (thus not really holding much for safe bike-riding. Instead, I sought out a few lesser-known roads and found a trove of biking opportunities.

The Westside Road, just a short hop into the National Park, looked hopeful for biking (despite a closed sign, rangers mentioned the closure was “subject to interpretation” – wink wink). This old, original road into the park continues roughly 14 miles in – apparently with sweeping views (and very few people). Unfortunately, there were enough downed trees to make the trip impassable on my Rad e-bike, so I sought other options nearby.

Mount Tahoma Canyon Road was my go-to for rides into the town of Ashford – for groceries at the quaint local store, ice cream at Whittaker’s Bunkhouse, and burgers at Basecamp Bar and Grill (with an added bonus of watching eager climbers preparing gear for summiting the mountain). It meandered through tucked-away homes, heavily-wooded thickets, and past a quaint roadside egg stand.

A small, nondescript road connecting Ashford and Packwood – officially NF Rd. 52 (but shown on my map as Skate Creek Road) – was a real gem! It paralleled the Paradise Road on the opposite side of the Nisqually River for the first half-dozen miles, then crawled up a small mountainside following Skate Creek back down into Packwood. At just over 20 miles each way, I wasn’t quite ready for that much of a bike ride, so instead chose a 10-mile stretch to explore, then later returned and drove the roadway – taking in more waterfalls, more towering trees, and finding a welcome respite in Packwood Brewing Company near the junction of Highway 12.

As is the case in most of Washington state, the flowers in and around Mount Rainier were beautiful, and vary from season to season. Currently, lowland flowers include tri-petaled trillium, salmonberry, salal, thimbleberry, foam-flowers, hooded ladies’ tresses, and wild strawberry (just to name a few). Once the higher elevation snow thaws, a sea of lupine, Indian paintbrush, aster, shooting stars, and Jacob’s ladder will be revealed. Late summer brings peak color to both the Paradise and Sunrise areas, but spring flowers have the added advantage of fewer visitors (i.e. a quieter, more serene environment).

The towns closest to Rainier’s Nisqually entrance harbor a trove of local artisans and a mess of friendly people. Whether you’re looking for one-of-a-kind pottery pieces at Ashford Creek Gallery, want to take in Dan Klennert’s brilliant, rusty, whimsical sculptures, or just looking for local eggs for breakfast, there’s a little something there for everyone.

The folks at Visit Rainier are pros when it comes to finding accommodations in the area – whether you’re looking for a family retreat for 12 or a cozy cabin for 2. My home for the week was an adorable cabin surrounded by a magical forest of centuries-old cedars known as Altimeter Cabin. It was said to have once been home to legendary climbers and mountaineers, and has since been delightfully updated by owner/host Andrea Brannon to make for a relaxing respite after a days long exploration. For nature-loving folks, the space is also available as a small group wedding and events venue. Magical forest wedding, anyone?

Mount Rainier holds a vast amount wildlife – most deeply imbedded in the lesser-trodden areas of the park. Columbian black-tailed deer, Douglas squirrels, ravens and chipmunks are commonplace sightings, but veer to the lesser-trodden areas of the park and you might be fortunate enough to spy bear, elk, pika or even a wolverine!  If wildlife’s on your radar, less than an hour’s drive from the park entrance – just outside of the town of Eatonville – is Northwest Trek Wildlife Park. With over 700 square acres, this park offers both free-roaming areas and a walk-through park – both with an abundance of native animals. While many businesses have made adaptations during COVID, the pivot taken by Northwest Trek is one I rather prefer. Their new premium ‘Wild Drive’ experience guides caravans of small groups to see wildlife in the free-roaming area from the comfort of their own car – guided and narrated by park staff. And, of course, their walk-through areas still include ample opportunity to explore animals in naturalized enclosures. With specialty options like private Keeper’s Tours, opportunities for photographers with Photo Tours, and their Kid’s Trek with a nature-inspired playground, there’s something for every type of explorer here!

I’m already missing the quiet mornings, mind-blowing views, delicious meals, and abundance of nature near Mount Rainier. Fortunately, I’ve got plenty of memories – and photos, of course. My biggest takeaway? While the mountain may be your destination, there’s so much to be said for the variety of small towns, quirky roadside art, and numerous things to see and do within the area – from biking to backpacking to picnicking in a snowbank.  And as the year progresses and seasons change, you’ll be able to make a full loop around the mountain – including stops at the Sunrise Visitor Center, the Grove of the Patriarchs, Box Canyon … but that’s another story (and another trip in my future!). 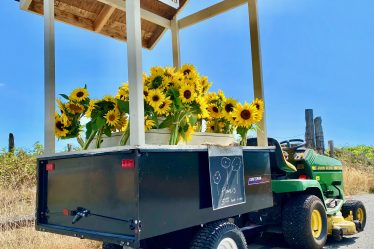 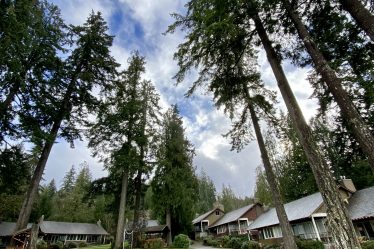 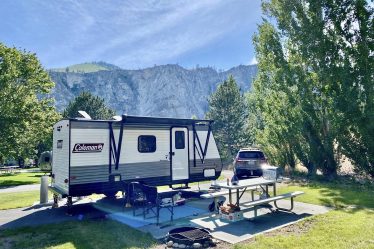